One tugboat captain, two women, but the real star: the ocean 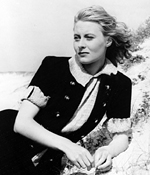 Recently selected by the British Film Institute as one of the core "360 Classic Feature Films," Remorques was a huge hit in wartime France because it featured the last appearances of Jean Gabin and Michèle Morgan before the Liberation.

Gabin is terrific as a taciturn, ultimately tragic tugboat captain in Normandy. A stalwart man of the sea, Gabin is truly betrothed to the ocean and frequently neglects his invalid wife (a fragile, piteous Madeleine Renaud). Gabin falls passionately in love with a mysterious woman (Morgan) whom he rescues from a freighter foundering in a storm, and must face betraying his beloved, failing wife.

Jean Grémillon is one of the most important French directors of the period – Georges Sadoul called him "France’s greatest representative of the realist tendency" – and his rendering of this simple tale reveals his mastery, particularly in his evocation of the maritime setting and his handling of the superb cast. Remorques left Grémillon poised for his greatest triumphs during the Occupation years. (R. Armes)