Mordant humor from a Hitchcock showman in Nazi-occupied France 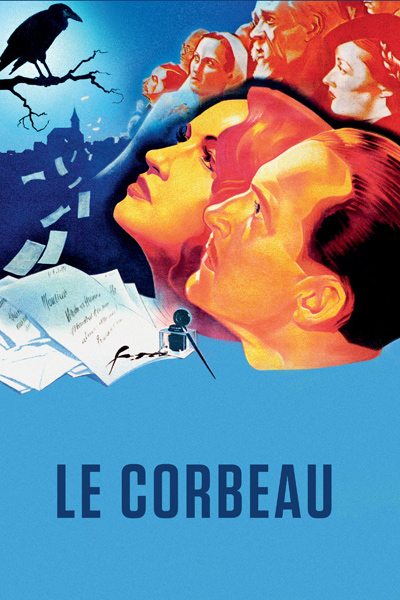 Casting a dark eye on human tendencies toward gossip and defamation, Clouzot explores the psycho-emotional havoc wreaked on a small town in the French provinces by a letter-writer whose anonymous poison-pen missives, signed "le Corbeau" (the Raven), claim to identify a wide variety of debaucherous activities on the part of various citizens. Most of the film's characters, of course, seem to have both opportunity and motive to author the letters. Even Dr. Germain (Pierre Fresnay), who's the locus of the virtiolic accusations, is a likely suspect.

Clouzot closely examines the ways that the flurry of mysterious letters arouses guilt and paranoia within the villagers, who seem to be motivated by fear and shame. The director's renowned mordant humor is on full display.

Clouzot is also a showman on the order of Hitchcock: the sequences depicting the profane appearance of new letters in sacred places -- during a church service and amidst a funeral procession -- are staggeringly well staged and photographed. There are single images in Le Corbeau that are freighted with a more accurate sense of malevolence and dread than in, say, the Lord of the Rings movies.

Cultural distance and well developed senses of cynicism probably help contemporary audiences easily relate to this stuff, which was considered outright scandalous by many of Clouzot's compatriots. The film was made in Nazi-occupied France. Clouzot went on, of course, to direct Wages of Fear and Diabolique, ambitious suspense films whose impact would be felt worldwide. (B. Frazer, Deep Focus)