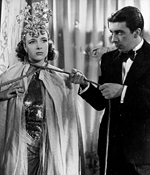 Fantastic indeed: a startling, delirious "dream film" which has been compared to The Cabinet of Dr. Caligari, but is infinitely more playful and elegant in its visual invention and atmosphere than the famous German work.

Denis, an overworked student who labours at night stacking boxes in the market at Les Halles, is ditched by his girlfriend but finds his dreams haunted by a heavenly vision, a young woman in shimmering white.

On the second night, Denis follows the mysterious woman into a succession of strange adventures in Parisian art galleries and museums, night clubs, and, in a celebrated sequence that looks back to Caligari, an insane asylum.

Master of silent French avant-garde cinema and of what he called "visual music," Marcel L’Herbier here gives full vent to his taste for elaborate sets and camera movements. The decor, lighting, and movement are all flamboyantly strange – fantastical in every way. L’Herbier seems determined to create a world sealed off from reality, with extravagant sets, a camera that cranes, pans, and whips around, and showy optical effects, such as the multiple image that captures Denis’ inebriated state. (R. Armes)