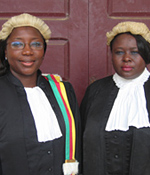 It is one thing to think that something is bad and needs to change. It is an altogether different thing to stand-up for what you believe and see what a difference a committed person can make. Two such persons are prosecutor Vera Ngassa and judge Beatric Ntuba who dare to question the status quo in their traditional Muslim village in order to protect the rights of women and children. These two lively, dedicated women struggle to find justice for six-year-old Manka who is beaten by her aunt and for Amina who takes the courageous step to take her abusive husband to court. Vera and Beatric tackle such cases with tenacity, grace and a great deal of kindness. Co-director Kim Longinotto has earned a reputation for exploring the social issues that are closest to the hearts of women with such films as Divorce Iranian Style and Dream Girls. Teamed with Cameroonian filmmaker Florence Ayisi, the two develop a trust with their subjects so that their cameras capture the stories in a most compelling and intimate manner. The only documentary selected for this year's Directors Fortnight at the 2005 Cannes Film Festival, Sisters in Law is an intelligent, extremely entertaining film that offers a rare look at contemporary Africa that celebrates courage, hope and, most of all, the possibility of change.