DIFF: Wrong Side up (Czech Republic) 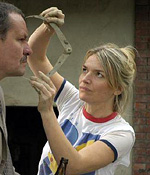 Lost in a dead end job as a truck driver at Prague airport, Petr Hanek (Ivan Trojan) still pines for Jana (Zuzana Sulajova), about to marry the more financially secure Alex (Jiri Babek). Petr's friend insists that the only course of action is to cut off some of Jana's hair and boil it with apple leaves, then sprinkle the result over the place where the two first met. The airport shipping company location builds a feeling of alienation. In an abstract moment, Petr drives home from work along the highway in a forklift. Odd, humorous character driven situations abound. Petr is discretely paid to watch his neighbors Alice (Zuzana Bydzovska) and Jerry (Jiri Bartoska) have sex, because they like an audience. His increasingly restless father David (Miroslav Krobot) used to narrate Communist-era newsreels, while his mother (Nina Diviskova) obsessively collects second hand clothes and tries to save the world. Bohemian artist Sylvia (Petra Lustigova) rescues David from his unhappy home life and convinces him to cash in on his former noteriety on the art scene. David's boss (Karel Hermanek) falls in love with a mannequin that mistakenly shows up, though it appears he may be the only sane person in the community. One day, a box arrives by mistake. All the subsequent problems it causes seem to be a metaphor for the characters' misdirected lives. Directed by Czechoslovakian Petr Zelenka and based on his award winning play, "Tales of Common Insanity" is rich with dark and sarcastic humour. "The only common denominator you can find with the characters is that they are all desperately trying to live with their partners and husbands and wives, whatever the cost is. And they fail," Zelenka says. "I think so-called happy people are very sad deep inside. And the exceptions are few."

DIFF: Wrong Side up (Czech Republic)