Surfing in Norway? A winning blend of humor and drama. 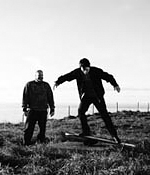 When thinking about surfing movies, the mind doesn't normally drift to Norway. But after watching MonsterThursday, moviegoers may never think of surfing in quite the same way. Directionless Even is having a bad day. Karen, his ex-girlfriend, is getting married to his best friend, Tord. Not only that, she is expecting Tord's baby. And Even really doesn't have anyone but himself to blame. He leads a directionless life, unable to make a commitment to anyone or anything. Tord, a world-class surfer, is the complete opposite--ambitious, responsible and athletic--the perfect husband. When Tord is called away on a business trip to Singapore he asks Even to look after Karen while he's gone. Although Even is loath to admit he's still in love with Karen, he goes out of his way to make an impression on her. He quits drinking and buys a surfboard. At first, he's a prime candidate for drowning. But Skip, a mysterious surfing legend, takes Even under his wing and becomes his mentor. Like a Zen master, Skip may have unorthodox training methods, but they begin to have a subtle effect on Even, and day by day it's not only his surfing skills that are improving but the entire way he relates to the world. As Even and Karen begin to reconnect and Tord makes a surprise return, the relationship between the three friends becomes as chaotic and tumultuous as the waves off the Norwegian coast. The forces of nature are rising. MonsterThursday is coming! With a winning blend of humor and drama, director Arild Østin Ommundsen has succeeded in creating characters that seem especially real. MonsterThursday heralds the arrival of an exciting new voice in Scandinavian cinema.