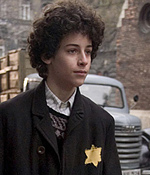 How can a 14-year-old boy come to terms with events beyond comprehension? That's the question asked in the debut feature by Lajos Koltai, the award-winning cinematographer best known for his partnership with Istvan Szabo (their 14 films together include Mephisto, Sunshine and Being Julia). In 1944, Gyurka is pulled from his Budapest neighborhood and deposited in a concentration camp. It is there, against a surreal landscape of death, suffering and adaptation, that he begins his philosophical musings, which only intensify when he returns to home. Is he a victim? Is his survival a random act? Can he find a sense of community and security after living through what he did? Can he put his experiences out of his head? Adapted from the autobiographical novel by Nobel prize-winning author Imre Kertesz, Fateless is a startling, ambitious addition to the literature of the Holocaust. Like Schindler's List, it is a film that allows us to reconsider and reevaluate, although never to understand, the most incomprehensible event in our history. Fateless' score, by Ennio Morricone, and its lead performance, by Marcell Nagy, are essential elements in Koltai's film, which is without doubt one of the most compassionate, shattering and, yes, beautiful films in recent memory. "What I discovered in Auschwitz is the human condition," Kertesz has said, "the end point of a great adventure, where the European traveler arrived after his two-thousand-year-old moral and cultural history. Now the only thing to re?ect on is where we go from here."