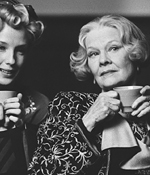 Dame Judi Dench's screen time for her 1999 Oscar-winning role as Queen Elizabeth in Shakespeare in Love came in at a total of eight minutes. Imagine what she does with a vehicle all her own. Yet it's still not completely hers, perhaps, given that her greatly admired fellow English actor Bob Hoskins plays opposite. (Hoskins made his mark on stage with his inimitable Iago in Shakespeare's Othello and on screen in the 1986 Mona Lisa, directed by Neil Jordan of this year's SDIFF Breakfast on Pluto.) Mrs. Henderson Presents presents Dench at her feisty, acerbic best as 70-year-old recent widow, Laura Henderson, returning from 30 years in India to pre-World War II London. Raring to get out from under her deceased husband's shadow, she rows down a river in widow's black and shuns old friends' traditional advice on how to overcome her grief. Laura sets her sights, instead, on a used-up West End theater. She buys it and hires the irascible Vivian Van Damm (Hoskins) to manage. How to make a go of it, though, is indeed the rub. Until, that is, she hatches the idea to mirror the now Windmill Theatre's French namesake, The Moulin Rouge. The solution? Mrs. Henderson will present nude reviews! Resonating with last year's theater-inspired Being Julia, director Stephen Frears (My Beautiful Laundrette, 1985; The Grifters, 1990; Dirty Pretty Things, 2002) antes up with this script by playwright Martin Sherman (Bent, 1997; Callas Forever, 2002). As the blitzkrieg on London begins, the theater becomes a refuge for thousands of soldiers, and love in the threat of such danger flourishes. Mrs. Henderson plays cupid for her star blonde and a young soldier. She also becomes vulnerable to Van Damm, but when she finds out he is married, the pair's go at each other is something to behold. Christopher Guest (This is Spinal Tap, 1984) makes a smarmy appearance as Lord Chamberlain. Young British pop idol Will Young appears as well. In all, Mrs. Henderson Presents is about love in the time of grief and war and how one woman holds her head above the rising tide.