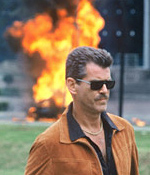 The Matador is a buddy film. It's also a highlight reel for Pierce Brosnan, playing one of the buddies, Julian, with abandon, edge, glee. and not a little self-parody. On a trip to Mexico City, Julian--an arrogant and over-the-top professional assassin--strikes up a cocktail friendship with Danny (Greg Kinnear), an amiable, straitlaced family man from Denver. (The film's Mexico and Denver scenes, as well as its scenes from other international cities, were shot south of the border). Danny's in Mexico City to try to cap a business deal after a number of previous ones failed. He's also trying to get a handle on the lost of his young son, who was killed in a school bus accident. Julian is biding his time between gigs as a "facilitator of fatalities" and ends up taking his new friend to a bullfight. As the matador ends the fight with a flourish, Julian explains to Danny what he does for a living. (The literal translation of matador is "one who hits," a killer, of course. Mutual admiration ensues. Six months later, however, when Julian visits Danny in Denver, the hit man has lost some of his confidence, having bungled two jobs because of panic attacks. Julian's still as brash as his gold-chain jewelry though. And his weapon itself is the gleam in the lusty eye of Danny's wife (Hope Davis, a cinematic resident of Denver once again, after her role as Jack Nicholson's daughter in About Schmidt). This time around, when Julian suggests that Danny and he collaborate, Danny has little to say but "yes." Director Richard Shepard (the 1991 Linguini Incident and television's "Criminal Minds") puts a deft spin on this black comedy, pairing dark wit and slick, teasing dialogue. He has done a fine job as well in pairing Kinnear's earnest, desperate business guy as straight man to Brosnan's flamboyant professional killer, in one scene staggering drunkenly across a hotel lobby wearing nothing but boots and a tiny Speedo. Philip Baker Hall, star of this year's SDIFF presentation of Duck, doubles as one of Julian's bosses.