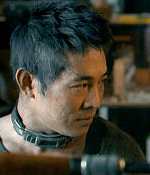 An opening fight scene grabs your attention. Li, unleashed, takes out a room full of defaulters and henchmen by kicking, punching, leaping, breaking, and pulling their hair. The crazed look in his eye and the rush of adrenaline make "Danny the Dog" seem like just the right moniker for this vicious pit bull. When the collar goes back on, Danny returns to an introverted simpleton.

Danny leaves Uncle Bart to live with Sam (Morgan Freeman) and his stepdaughter Victoria (Kerry Condon). Over time, they give Danny back his humanity through music, attention, love, and groceries. But later, Danny encounters the old gang again, and he is pressed back into service. He might have to fight to keep the old gang out of his new life.

All the martial arts scenes in Unleashed are top notch, although there is a surprising gentleness to the story (by Luc Besson). Louis Leterrier (The Transporter directs. Yuen Woo-Ping choreographed the action. (M. Mapes, Movie Habit)