The fascinating world of quadriplegic rugby, AKA murderball 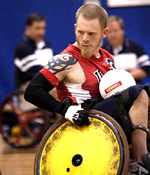 The sport now called "quadriplegic rugby" used to have a more colorful name. "It used to be called 'murderball,'" says Mark Zupan, "but you can't really market 'murderball' to corporate sponsors."

The documentary covers a lot of ground in 88 minutes. It introduces us to the sport, to quadriplegia (answering questions able-bodied people always ask, including the ones about sex), and to the players. It also tells the story of the 2004 season, in which the Americans hope to take the title back from the Canadians.

The co-directors clearly shot a lot of footage, hoping they'd find a story in the editing. They didn't just find one, they found many. These real stories of human drama -- containing a range of human behavior from ugly to noble -- are more impressive than any film about a comeback season. (M. Mapes, Movie Habit)