A smart science fiction movie; a tribute to Carl Sagan 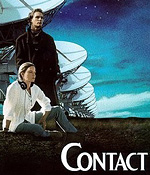 Contact is a smart science fiction movie without being an action movie. Instead of laser blasts, chases and grunting, it offers questions, dilemmas, and discussion. It is science fiction from the perspective of a scientist, not from that of a studio with too much money and gunpowder.

Foster plays Ellie Arroway, a Sagan-like scientist working for SETI (the Search for Extra-Terrestrial Intelligence). She finally finds a repeating signal coming from a nearby star. As Ellie starts decoding the cryptic message, the world watches, frets, and prays. Ellie learns that the message is a blueprint for a spaceship.

Contact is a great tribute to Sagan. When Foster says "billion" you can almost hear his voice. The opening shot of the movie is absolutely beautiful, and the richly layered soundtrack gives meaning to that beauty. It is a tribute to the producers that they took a chance on a smart, human science fiction movie, instead of buying explosions and space battles. (M. Mapes, Movie Habit)