Crazy subway workers try to catch a killer on the loose 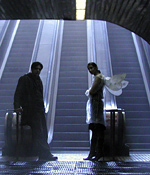 Bulcsú (Sándor Csányi) is the Oedipal anti-hero at the heart of Hungarian director Nimród Antal's drop-dead brilliant Kontroll. A ticket-taker and a rent-a-cop, he's assigned to a misfit crew at odds with every other misfit crew in their Orwellian transit agency. The film, a surprisingly violent and kinetic slapstick comedy, begins with one character aping Harpo Marx's blowtorch lighter bit from Duck Soup and ends with scenes that recall Vincent Ward's visionary The Navigator.

Bulcsú is a Hal Hartley protagonist, too smart and too damaged for the world, set adrift in the film on the heels of a hooded figure pushing commuters into the path of onrushing trains. He tries to find love with a young woman (Eszter Balla) who rides the subway dressed in a bear suit while seeking his own identity in the motivations of the killer haunting his adopted, infernal home.

A Jungian dream in which Bulcsú finds himself crawling through something like an endless vaginal tunnel is the moment when Kontroll comes fully alive: it's the juncture between metaphor, craft, and narrative--and for almost all of its final hour, the picture maintains an unbelievably high level of invention and insight. It's a great science-fiction piece, a razor-sharp satire, and an impressive calling card for an emerging Hungarian cinema. (W. Chaw, Film Freak Central)
(Screening made possible by ACE fees.)

Sponsored by The Colorado Daily