Save the Green Planet 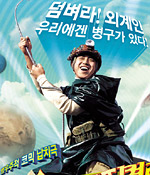 Mad conspiracy rules in Korean writer-director Jang Jun-hwan's first feature. A pair of wackos in homemade superhero gear abduct a middle-aged business tycoon in an underground garage. According to them, the CEO is a creature from outer space -- an Andromedan prince to be precise. The earth is being taken over by these extraterrestrial beings, with the destruction of the planet scheduled for the next lunar eclipse.

Jang's movie is a heady mélange of revenge, hallucination, and Grand Guignol. His one-movie new wave makes adroit use of photos, surveillance cams, animated drawings, newsreel footage, and a recurring, discordant version of "Over the Rainbow."

Shifting gears from wacky to suspenseful to sadistic, Save the Green Planet is consistent only in its flash and characters -- the movie is populated by multiple crazies. Among other things, Jang contrives the funniest death-of-the-dinosaurs theory and 2001 parody that I've ever seen, and there's a comedy control-room Armageddon ready-made for William Burroughs.

What's most remarkable about this lurid, wildly busy spectacle is how serious it can be -- that is, how poignant and poetic. It's hard not to be touched by Lee's vision of his mother (who has been put in a coma by an industrial accident) telling him that he alone can save the earth or the idea that, although the green planet may explode, television will always remember us to the cosmos. (J. Hoberman, Village Voice)

Save the Green Planet