Dogtown and Z-Boys with stuff the documentary couldn't capture 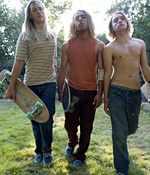 Lords of Dogtown is a dramatization of Stacy Peralta's 2001 documentary Dogtown and Z-Boys, a look at the kids who revolutionized skateboarding in the '70s.

Lords throws its young cast into scruffy '70s overdrive. Victor Rasuk plays Tony Alva, one of the first kids to grab for the brass ring of subcultural stardom.

Peralta creates situations no documentary could capture: family problems, byplay between the skateboarders and the libidinous party atmosphere that surrounded a scene that has taken on some of the aura of legend.

The most interesting performance belongs to Heath Ledger, who plays Skip Engblom, the man who ran the Zephyr Surf Shop and who, in the mid-'70s, sponsored the skateboard team that revolutionized the sport. (R. Denerstein, Rocky Mountain News)