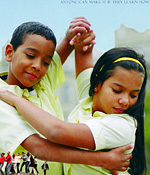 Mad Hot Ballroom is an engaging look at New York City school kids who learn ballroom dancing. In this documentary, kids learn to dance under the guidance of a teacher who moves right along with them - and also understands their lives away from school.

You can't help but get caught up in the enthusiasms of these kids, some of whom survive on gumption and guts. Others become impressive dancers, and almost all of them have attitude to burn. The kids make the film.

The film has the ability to remind us of what it's like to be 10, just beginning to notice girls or boys and, in some cases, becoming as serious about dance as any professional.

Without Mad Hot Ballroom we'd never have met these kids, and we'd be worse off for it. When the final contest arrives, we've acquired something far too many films lack: a genuine rooting interest - not just for kids in a dance contest but for youngsters you hope have taken a big step toward happiness and fulfillment. (R. Denerstein, Rocky Mountain News)