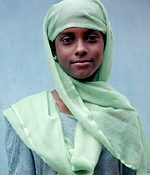 The impulse to document the lives of poor, neglected and oppressed people is unquestionably noble, but it is not without certain ethical difficulties. While most films of its kind allow this contradiction to hover in the background, "Born Into Brothels," a documentary about children growing up in Calcutta's red light district, faces it squarely.

Rather than simply record the lives of those children, Zana Briski became their teacher and advocate. The resulting film is moving, charming and sad, a tribute to Ms. Briski's indomitability and to the irrepressible creative spirits of the children themselves.

The seven children were given cameras to take pictures of the world around them. Their work provides the film with some of its most beautiful and revealing images, offering glimpses of life in the crowded, colorful alleyways of the red light district that no outsider could capture.

While "Born Into Brothels" recounts her tireless efforts to help her protégés escape from the poverty and sex work that seems to be their destiny, it also shows the limits of what a single person can do. "Born Into Brothels" tempers its optimism with realism in a way that is both uplifting and heartbreaking. (A.O. Scott, New York Times)