1st feature out of Iraq since the war, from the director of A Time for Drunken Horses 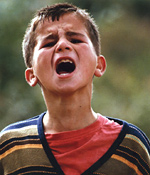 We are in Iraq, on the brink of the American invasion. To be specific, we are in the Kurdish enclaves of northern Iraq, in the makeshift villages and refugee camps. Nobody seems to be in charge here—nobody, at any rate, from the adult population.

Kak's (Soran Ebrahim) friends and dependents call him Satellite, because what they desire most is not food or shelter but news, and among Satellite’s gifts is a capacity to haggle in the markets, then come home dragging a satellite dish. The movie revolves around a curious historical anomaly: looking forward to war.

Unlikely objects and daunting juxtapositions pepper the landscape of the picture, starting with the throng of youngsters patiently working their way up a grassy hillside. They carry baskets on their backs, and you find yourself craning to see what’s inside: the children are harvesting land mines, which, if unexploded, will fetch a fair price.

The heroine, or leading victim, of “Turtles Can Fly” is Agrin (Avaz Latif), who is fifteen. She has one brother who has stumps for arms, and another who is blind. The problem is that, as we discover, the second of these is not a brother at all but Agrin’s son, born of a rape by Iraqi soldiers. The image of the blind boy reaching for a necklace strung with bullets, or howling into a stack of empty shell casings may leave some viewers almost unable to cope. Turtles Can Fly hits and hurts the eyes (the rainy days are lousy enough, but the skies of royal blue, above such grief, feel especially insulting). (A. Lane, The New Yorker)