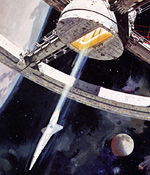 Kubrick begins his film with a sequence in which one tribe of apes discovers how splendid it is to be able to hit the members of another tribe over the head. Thus do man's ancestors become tool-using animals.

At the same time, a strange monolith appears on Earth. Until this moment in the film, we have seen only natural shapes: earth and sky and arms and legs. The shock of the monolith's straight edges and square corners is one of the most effective moments in the film. Here, you see, is perfection. The apes circle it warily, reaching out to touch, then jerking away. In a million years, man will reach for the stars with the same tentative motion.

The action advances to the year 2001, when explorers on the moon find another of the monoliths. This one beams signals toward Jupiter. And man, confident of his machines, brashly follows the trail.

What remains fascinating is the fanatic care with which Kubrick has built his machines and achieved his special effects. There is not a single moment, in this long film, when the audience can see through the props. The stars look like stars and outer space is bold and bleak. If his space vehicles move with agonizing precision, wouldn't we have laughed if they'd zipped around like props on "Captain Video"? This is how it would really be, you find yourself believing. **** (R. Ebert)
(Screening made possible by ACE fees.)