From the director of Swimming Pool 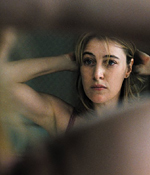 Director François Ozon changes genres and styles so prolifically that he's a tough auteur to pin down. If there's a common denominator, it may be the feeling that love is possible, but relationships are doomed to failure or death.

That cynicism pervades Ozon's crisp marital drama 5x2, which follows a couple from the end of their marriage to the beginning of their courtship, with pointed stops in between.

Stéphane Freiss is a sullen, passive-aggressive businessman first seen in a lawyer's office, quietly accepting divorce terms next to his wife Valeria Bruni-Tedeschi. The two head back to a hotel room for a desultory sexual interlude that feels regrettable to both even before it turns into something like a rape. From there, 5X2 goes back in time: The second sequence shows Freiss and Bruni-Tedeschi hosting Freiss' gay brother and his much younger lover, who share an open relationship that satisfies them both. The third deals with their son's birth, and the fourth takes place on their wedding night, a joyous occasion with an unexpected coda. All of which leads back to the beginning, when the two connect while on separate vacations at an Italian resort hotel.

Four of 5X2's five segments are set during key events in any such relationship--first meeting, marriage, childbirth, and divorce--but the evening with Freiss' brother and his lover may be the segment that most indicates what Ozon's getting at. The film could be read as a potent critique of heterosexual relationships, which are founded on rules that wind up damaging trust more than they strengthen it. (S. Tobias, The Onion)