If you've only seen it on home video, you haven't seen it 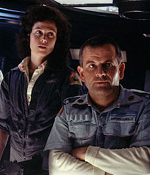 Unlike many of the kids in my second grade class, my parents wouldn’t take me to see “Alien” when it was released in 1979 – and with good reason. It’s a scary, scary movie. I wasn’t able to see it until the advent of home video recorders. Trust me. This wasn’t the best way to experience the movie.

While I grew to appreciate “Alien” over the years, I never experienced its full effect until about seven or eight years ago. From that point on, I was hooked on the fact that some movies just need to be seen on the big screen.

Most people over 30 had the chance to see “Alien” in the theaters on its original release. But there’s a whole generation that missed out on this. And even for us big kids who have seen it before on nothing larger than a 25-inch television, the return to the big screen is a real treat.

Its perfection comes from its simplicity. The cast is small, and their relationships are uncomplicated. With the entire film taking place on a ship in space, it gives the audience the perspective of being isolated with them. And the often imitated, but never equaled, alien design will forever be the legacy of H.R. Giger. (K. Carr, Film Threat)