Compilation of the best undersea footage from the BBC 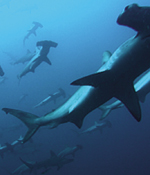 Whew! It was beginning to look like Imax had cornered the market on nice, interesting wildlife documentaries.

Look at those sea lions frolicking on the shore. You're noticing how totally shiny and adorable their pelts are, when, suddenly, the carcass of one sea lion goes flying through the air and crashes, hard and ominously, back into the ocean. Did no one see that dorsal fin? Run, sea lions -- or flop really fast! The frame slows down as they attempt to escape up shore, but it's no use. The killer whales have arrived, with every intention of living up to their names, not their Sea World reputations.

"Deep Blue" is billed as "a natural history of the oceans." But it's also an exquisitely made ballet that operates on the not-entirely-false presumption that its ideal audience is both innocent and bloodthirsty. The film is a better action movie than most of what you'll see this summer, and there are certainly more visceral thrills.

In 83 minutes, the film moves from sandy beaches around the world to activity miles and miles below on the ocean floor, where a volcanic metropolis and its rarely glimpsed inhabitants await. From there we see that coral is not to be toyed with and that the stingray is best described as a UFO that prefers to land on its dinner. Some jellyfish pulse and glow like spaceships at the end of "Close Encounters of the Third Kind." Others look like something Halle Berry would wear to the Oscars. Most impressive of all is the Falstaffian 30-ton blue whale. (W. Morris, Boston Globe)