Enron: The Smartest Guys in the Room

Take a ride to the seventh level of corporate hell 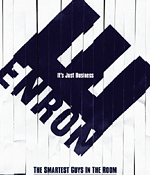 The horror of finding out how much we didn’t know makes this documentary one of the most memorable cinematic experiences in a long time.

The research for the film is based on the book by journalists Bethany McLean and Peter Elkind. These two have brilliantly broken down the entire Enron dynasty, from its creation to its demise, from an astounding sixty-five billion dollars in assets to total bankruptcy in 24 days.

Gibney has created a very simple narrative flow that allows laypersons to understand what went on. Peter Coyote, as narrator, gives us just the right spark we need to cope with the mortifying information given in the film. His voice, over a magnificent soundtrack, acts as a great tool that Gibney uses gracefully through out the film.

The key players in this corporate tragedy are CEO Kenneth Lay, CEO Jeffrey Skilling, CFO Andy Fastow, and a few other fraudulent executives of the company who fell into heavy fire over the scandal. I’ve never seen a more impressive cast of villains at the movies. (N. Reed, Movie Habit)

Enron: The Smartest Guys in the Room