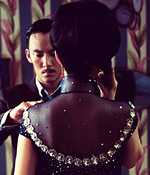 Wong's The Hand, set in 1963 and some years afterwards, is the poignant story of a beautiful Hong Kong courtesan (Gong Li), her shy tailor (Chang Chen) and their long but ambiguous relationship as his prestige rises and hers falls. Soderbergh's Equilibrium reveals the mysterious sex dreams of a nervous young Manhattan advertising agency man in 1955 as related to his older, blase psychiatrist (two perfect roles for Robert Downey Jr. and Alan Arkin).

Antonioni, in the climactic The Dangerous Thread of Things -- set in the present, though it feels more like the mid-'60s -- draws a portrait of marital disintegration and sexual adventure among the upper classes, a sex triangle between an American (Christopher Buchholz), his Italian wife (Regina Nemni) and their neighbor (Luisa Ranieri).

Eros, which resembles those popular '50s or '60s Italian or French romantic anthology films, was put together by Antonioni's producers for 1995's Beyond the Clouds. They intended it to showcase his own entry, based on tales from his book. Ironically, the Wong and, to a lesser degree, Soderbergh episodes have won most of the early critical praise. (M. Wilmington, Chicago Tribune)