The most exciting German film since Das Boot 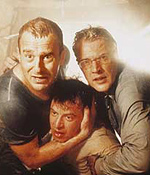 Released on television in its native Germany a few years ago, The Tunnel boasts the kind of plot that would seem ridiculously implausible if it weren't based on a true story.

The tale of resilience and persistence casts Heino Ferch as a championship East German swimmer who previously served hard time for political dissent. When the Berlin Wall comes up, he wastes little time sneaking past it into West Germany. Once there, Ferch, his engineer brother, and a group of like-minded souls hit upon a scheme as audacious as it is seemingly foolhardy: to tunnel under the Berlin wall, emerge on the East German side, then take their families and loved ones back to the West. Beyond the obvious logistical problems, the schemers face a host of other complications, including the ever-present threat of informers and a savvy East German Raskolnikov hot on their trail, not to mention the presence of an NBC camera crew out to document their Cold War heroics.

The Tunnel is an epic endeavor that works on the broad, sprawling canvas of social and political history. For its dogged diggers, the Cold War is less a scary abstraction than a horrifying, concrete reality that cleaves their existences in two.

The Tunnel is more than just another well-constructed thriller with elements of melodrama. (N. Rabin, The Onion)