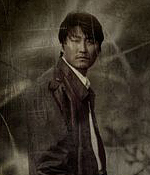 The furthest distance between two points is always between a kidnapper and his money. In "Sympathy for Mr Vengeance", though, getting the money is easy. It's staying alive long enough to spend it that's the problem.

"Sympathy for Mr Vengeance" stars Shin Ha-kyun as Ryu, a deaf and dumb steelworker who kidnaps his boss' daughter in order to pay for a kidney operation for his beloved sister. Nothing goes according to plan, and what ought to have been easy money soon turns into blood money.

Director Park Chan-Wook says he wanted to create a hard-boiled Asian thriller that eschewed the overblown visual excess of recent Korean efforts in favour of a darker, more realistic delivery.

Although cinematographer Kim Byung-II has an eye for composing quite unusual shots, Park refuses to substitute bravura technical ability for emotional engagement.

Suitably, for a movie about a deaf-and-dumb hero, the audio track veers from moments of uncanny silence to a screeching jazz saxophone to even more disturbing sound effects of torsos being cracked open, heads beaten with baseball bats, and, in the most excruciating moment, a torture scene involving electrodes and earlobes.

Brutally nihilistic, this is one of the best Korean films to have hit these shores in a very long time. (J. Russell, BBC)