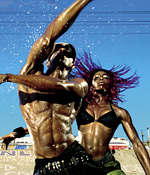 Sort of a hyperspeed hip-hop (the movie opens with a disclaimer that no footage was artificially time-lapsed), clowning is the brainchild of one Tommy Johnson. An ex-con who wanted to get his life in order, Johnson became the children's party entertainer Tommy the Clown. As some members of his delighted audience grew older, they wanted to learn how to dance in clown face like that. Johnson opened a clown dancing school as an alternative to gangs, drugs and other neighborhood despairs.

Krumping channeled the same wild moves into more conscious expressions/releases of anger. The different crews are immensely proud and compete ferociously with one another, but always maintain respectful and friendly relations when they're not hurling themselves at each other in violent choreography.

Just because these kids keep their aggression to the fantasy dance ground doesn't mean they're invulnerable to tragedy. Death, crime and indignity stalk their streets, and even the beloved Tommy is not immune. Still, rarely has a film about the underprivileged felt as positive, in a completely un-Pollyanna-ish way, as "Rize" does.

And I don't recall ever having seen one that was so musically, muscularly watchable. (B. Strauss, L.A. Daily News)