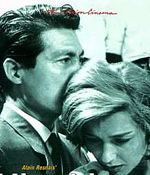 French actress Elle (Emmanuelle Riva) is staying in Hiroshima for a few days shooting a movie about peace. There she meets a Japanese architect named Lui (Eiji Okada) with whom she has a one night stand. Despite the fact that both of them are married they find themselves falling love with one another.

In a short time Elle shreds her usual romantic indifference and begins to recall the tragedy of her lost first love with a German soldier during the occupation of France in World War II. In minute detail she recalls the joy and then pain of that love. And over the course of two days she falls in love with her interlocutor.

The film’s simplicity is belied by the fact that it compares and contrasts the tragedy of Hiroshima with the tragedy of young love. Resnais and screenwriter Marguerite Duras never explicitly compare the two. Instead they explore the nature of forgetting and remembering with regard to human emotions.

The beauty and power of the film comes primarily from the editing, which from the film’s first cut, is both brilliant and evocative. In the first 15 minutes Resnais uses a poetic, elliptical editing structure that shuffles black and white images of amorous close-ups, newsreel footage, and reconstructed war footage together to draw us into the theme of memory.

The film posits the very simple question, "How can we forget tragedy?" Yet it never directly answers that question so much as skirts the issue and lets the audience decide for themselves the beauty, horror, and reflection of memory. Directed by Alain Resnais. (M. Langdon, FilmCritic.com)

Our thanks to the British Film Institute for giving us access to their restored 35mm print.