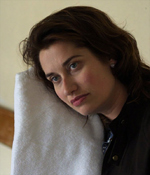 Late in his new film "Kings and Queen," the wildly gifted French director Arnaud Desplechin yanks the rug from under his characters and sends both them and us reeling. Up until that point, Mr. Desplechin has seemed like a disinterested witness to the goings-on of his two principal characters, Nora (Emmanuelle Devos) and her former lover, a violist named Ismaël (Mathieu Amalric). But any idea that Mr. Desplechin has opted for some kind of authorial neutrality vanishes when a third character abruptly delivers a late-act speech so steeped in bile it upends everything we think we've understood in this story.

The opening and closing scenes could suggest that everything in between emanates from Nora's point of view, but that would be too easy for a director as wily as Mr. Desplechin, who has no interest in polishing narrative like a gemstone; he would rather take a chisel to it. If "Kings and Queen" doesn't initially seem as radical as the director's earlier work, it's only because things happen so fast that it's difficult to linger in the scenes for long.

It's only after the second deus ex machina hits, and it hits you like a blow, that you realize that until this point everything has been filtered exclusively through Nora and Ismaël, two radically self-interested subjectivities.

Along the way to Nora's perhaps mythical ending, the filmmaker will insert images from classical myth as if to remind us that desire turns ordinary mortals into gods. It's worth remembering that when the narrator first tells the story of Leda and the Swan, he says that "Zeus loved Leda and came to her in the form of a swan." What he doesn't say is that Zeus came to Leda in duplicity and ravaged her without pity. (M. Dargis, N.Y. Times)