A powerful look at the ecological and economic impact of globalization 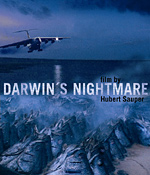 The West's plundering of the natural resources of Third World countries may not be a new story, but Austrian director Hubert Sauper's compelling documentary succeeds in revealing the subject in a memorable new light. Focussing on the fishing community of Mwanza on the shore of Lake Victoria in Tanzania, Darwin's Nightmare follows its impoverished inhabitants who export their catches to Europe and Japan in return for Russian cargo planes full of arms and ammunition destined for civil wars in neighbouring countries.

Darwin's Nightmare begins with a "little scientific experiment" in the 60s, when a bucketful of Nile Perch was introduced into the world's largest tropical lake. This fish turned out to be a ruthless predator, multiplying rapidly and wiping out all the other species in the waters. Whilst the locals sell the white fillets to overseas markets, they themselves are forced to eat scraps from the rotting perch carcasses. Mwanza's population, meanwhile, has been decimated by AIDS, with many of the women turning to prostitution and gangs of glue-sniffing, orphaned children left to roam the streets.

Juxtaposing natural beauty and human hardship, Sauper lets his film unfold at an unhurried pace and he interviews, sometimes secretly, an impressive range of people connected to events in Mwanza. He speaks to pilots, factory owners, fishermen, bar girls, priests and journalists. Half the Tanzanian population, it emerges, subsists on less than $1 dollar a day, and one man explains how war is hoped for, because at least men can then be paid by the government to fight. It's a shocking reminder of how what Darwin called the "survival of the fittest" depends on the exploitation of the least economically privileged. (T. Dawson, BBC)