Shake Hands with the Devil

The real man behind Nick Nolte's character in Hotel Rwanda 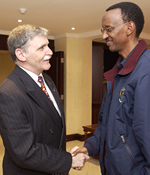 Candian Gen. Roméo Dallaire was sent by the U.N. to Rwanda without orientation or briefings. He had sufficient reason to expect peace, since Rwanda's Hutu government signed a treaty with the minority Tutsi opposition party, the Rwandan Patriotic Front.

But as a still-traumatized Dallaire recalls in "Shake Hands," he did not immediately see what was coming.

Instead of sending more peacekeepers, the United Nations ignored the general's cry of alarm. Moreover, troops from Italy, France and Belgium were concerned only with evacuating their expatriates out of the country. Having no strategic value to the West, an embittered Dallaire says, "Africa didn't count. We just wrote off the continent."

"Shake Hands" complements other recent features (Hotel Rwanda) in terms of deepening our awareness of the causes and extent of the butchery that took place. But it also offers a rare and privileged portrait of a heroic man profoundly troubled by a terrible experience. Some of the most compelling sequences in the film come toward the end, when Dallaire describes a madness that overcame him after months of futility and horror.

Dallaire's return to Rwanda has a cathartic effect on the shaken man. But it also brings some new shocks, such as Dallaire's visit to a hutlike museum of skulls — thousands of them — gathered from victims strewn everywhere during Rwanda's nightmare. (T. Keogh, Seattle Times)

Shake Hands with the Devil