Not on the Lips

Alain Resnais' latest is a vibrant romance, comedy, and musical 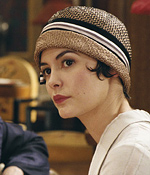 Light, fluffy and deliciously decadent, Pas Sur La Bouche! has all the indulgent naughtiness of an overstuffed chocolate eclair. Based on a 1920s operetta by André Barde, this romantic musical comedy is a jaunty revival of old-fashioned French farce. Sabine Azéma stars as Gilberte Valandray, a married woman whose high society life is thrown into chaos when her American ex-husband arrives in Paris. Audrey Tautou and Isabelle Nanty are among the actors caught up in the comedy hi-jinks and musical numbers.

Peppered with inconsequential musical numbers about unwelcome guests, love affairs, and modern art, this is a triumph of style over substance. Director Alain Resnais - the filmmaker behind such landmark works of French cinema as Hiroshima Mon Amour and Last Year At Marienbad - is clearly letting his hair down after six years absence from the cinema screen. The result is lightweight fun. (J. Russell, BBC)

Not on the Lips