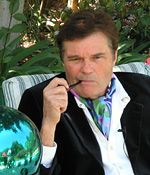 Cinematically, there's not much going on in The Aristocrats, a talking-heads documentary co-produced by Penn Jillette of Penn & Teller. Nevertheless, it's one of the funniest, most entertaining movies you're likely to see this year.

Penn hangs out with the likes of George Carlin, Fred Willard, Stephen Wright, and the kids from South Park. With interviews from about 90 comedians, The Aristocrats is a veritable who's who of American comedy. Each tells his own version of a joke known as The Aristocrats.

I won't tell the joke here, but it's an open-ended affair that allows each comedian to give it his own particular spin. The one requirement is that the joke be as filthy, disgusting, and offensive as possible.

Different personalities tell the joke in very different ways. Some go for the scatological humor, some try for the surreal or absurd; still others try to drag the joke out to superhuman lengths -- 2 1/2 hours seems to be the current record. The writers of The Onion brainstorm in front of a whiteboard, trying to find the perfect, most offensive ingredients (one suggests that the joke needs to include the word "Republican" somewhere).

In the end, all that matters is that The Aristocrats is a hilarious movie featuring some of the funniest people alive hanging around and amusing themselves in front of a camera. (M. Mapes, Movie Habit)