Tell Them Who You Are 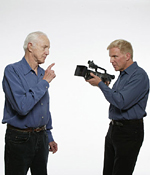 Tell Them Who You Are, about the legendary cinematographer Haskell Wexler, is filmed by his son Mark.

The only child of the second of Mr. Wexler's three marriages, Mark engages in a power struggle with his father, now 83, for control of the movie being made. Haskell sharply criticizes his son, suggests camera angles and lighting ideas, and refuses to sign a release form until the movie is completed and has met with his approval.

His feistiness expresses more than just the impatience of an imperious prima donna. In a gym sequence in which he vigorously works out with a trainer and slugs at a punching bag, you sense him raging against old age itself.

Almost every frame of Tell Them Who You Are conveys an intimate, emotionally charged understanding that only a spouse or an immediate family member could bring to such a project. This sense of personal mission helps make Tell Them Who You Are the richest documentary of its kind since Terry Zwigoff's Crumb.

A pioneer of cinéma vérité, the elder Mr. Wexler won two Academy Awards as a cinematographer (for Who's Afraid of Virginia Woolf? and Bound for Glory) and worked on such film classics as In the Heat of the Night, American Graffiti, and One Flew Over the Cuckoo's Nest. He also directed, wrote and co-produced the 1969 film Medium Cool.

Movie stars (from Jane Fonda to Paul Newman) and directors (from Albert Maysles to George Lucas to Mr. Sayles) parade in front of the camera to describe their feelings about a man who boasts, "I don't think there's a movie I've been on that I didn't think I could direct better." (S. Holden, N.Y. Times)

Tell Them Who You Are