Best of the best: nominated live-action and animated shorts 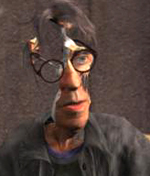 All movies begin as a bet whether the following minutes onscreen will be worth our time, but sitting down in front of a shorts program seems an even starker gamble. Each director's intensity is distilled into only a few moments, and if the brief movie doesn't click right away, part of the viewing brain immediately shouts, "Next!"

The best of this year's bunch is the surrealist animation of Ryan, a 14-minute Canadian homage to a once innovative animator now broken down by alcohol and mental illness. Larkin and other former drunks slouch and smoke, each character's body animated with jagged pieces missing. The result is addition by reduction. With a wisp of hair covering enormous holes in his psyche, Larkin is pathetic and intriguing within seconds of looking at him.

Before this admirable heaviness, though, is the goofy fun of "Gopher Broke," an "Ice Age"-style animation of a hungry rodent's quest to acquire all the vegetables falling off a turnip truck. Don't turn away during the rude surprise ending.

The best camerawork is in the noirish live-action brief from New Zealand, "Two Cars, One Night." Parents stopping at the local watering hole for beers and flirting leave their bored Maori kids in the parking lot the neon lights of the honky-tonk gleaming off the old car hoods.

Here are, all in one package, all the short films nominated for a 2005 Oscar: In the Animated Films category they are: Ryan (Canada), Birthday Boy (Korea), Gopher Broke (US). In the Live Action category they are: Wasp (UK), Two Cars, One Night (New Zealand), 7:35 in the Morning (Spain), Little Terrorist (India). Bonus Short: Rex Steele: Nazi Smasher (US)