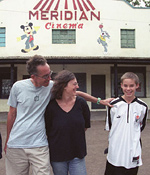 Steve James's "Reel Paradise" is an honest look at the experience of a family who lives a yearlong tropical movie adventure in Fiji. Without romanticizing the experience, the documentary captures the exploration, excitement and frustration of a family's last month in another culture.

Pierson did a segment on the world's most remote movie theater for his IFC news magazine show "Split Screen." The theater was going to close down, so Pierson decided to move to the island for a year and show movies for free. There's a certain charm to the dusty, rundown theater filled with enthusiastic islanders that makes the average experience at a half-empty multiplex seem a bit hollow.

Taking his audience into consideration, Pierson admits there are two or three "Hot Chicks" for every "Bend it Like Beckham." Shots of his face while watching the movies reveal a certain joy in knowing his audience is reveling in the material. Wyatt, John's energetic son, provides an interesting contrast to his father by offering a voice-of-the-people opinion on movies, insulting his father's more art-oriented programming choices.

Life in paradise isn't entirely sunny. The Piersons face being different from everyone else in the community. John's controlling personality doesn't sit well with the laid-back Fijian way of life. While the Pierson's experience was no doubt ultimately a rewarding one, "Reel Paradise" recognizes that it wasn't simply a fun extended vacation. (J. Mathews, Film Threat)