Lyrical, explicit chronicle of an affair between two attractive people: no one under 18 will be admitted 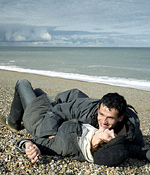 The notion that our sexual behavior is the purest expression of our deepest selves is delicately explored in "9 Songs," Michael Winterbottom's lyrical, graphically explicit chronicle of an ordinary love affair between two attractive people.

Matt (Kieran O'Brien), the narrator, is a British glaciologist remembering the recent past during an expedition to Antarctica. Lisa (Margo Stilley), the frisky, gamine lover he recalls with a mixture of fondness, exasperation and desire, is a headstrong 21-year-old American he meets at a rock concert in London.

With sexually explicit love scenes that depict the arc of their relationship in encounters that grow increasingly complicated and emotionally tricky, this brave, melancholy, unabashedly romantic movie would like to be the film many had hoped to see in the post-"Deep Throat" era.

Mr. Winterbottom's film unfolds as the cinematic equivalent of a sustained rock ballad in which live performances attended by the couple in concert halls around London are interwoven with scenes of intimacy that might be compared to electric guitar riffs. The mostly melodic songs, by groups like Black Rebel Motorcycle Club, the Dandy Warhols and Primal Scream, are intended to comment on the relationship.

"9 Songs" is lovely to watch. Especially when it forsakes the concert hall and visits the English seaside, the film acquires the high romantic gloss of "A Man and a Woman." At such moments, Matt and Lisa begin to suggest prototypical, somewhat idealized modern lovers, two pretty people inviting a soft-core fantasy of romance at twilight. (S. Holden, New York Times)