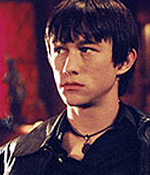 A boy declares that the first time he laid eyes on his Little League coach it was mutual desire at first sight. Actually, the memory of that rule-breaking gaze belongs to 18-year- old Neil McCormickca. And we can only hope that Neil (Joseph Gordon-Levitt) is an unreliable narrator.(Neil's a hustler who complains that he has turned tricks with every guy and his ugly uncle in their small Kansas town.)

Brian Lackey, Neil's counterpart in "Mysterious Skin" tells a different story. Yet his theories are just as iffy as Neil's. "The summer I was 8 years old," Brian begins, "five hours disappeared from my life. Five hours, lost, gone without a trace."

Neil runs away from the truth even as he thinks he has met it head on. Brian bumbles toward discovery, certain that alien explorers are the key to his mystery.

But what really gives "Mysterious Skin" such emotional traction is Neil's painful lesson that in owning his sexual identity he has tried too hard to make the coach's abuse consensual.

Be prepared: There are fairly explicit scenes between Neil and his johns. Also know this: The interactions between the coach and the boys aren't exploitative, just shattering.

"Mysterious Skin" is not an easy film. You're likely to be bruised by its truths. To his credit, Araki has made that a risk well worth taking. (L. Kennedy, Denver Post)