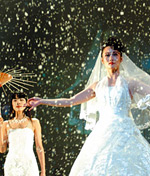 Chinese master Jia Zhang-ke's haunted The World is set in Beijing's World Park amusement centre (which recreates a hundred of the world's landmarks to scale in chintzy, amusement park-style), it spends time in a medium-shot remove.

"The Twin Towers were bombed on September 11th. But we still have them," says one park worker with pride to his visiting family, while another visitor remarks that the miniature Eiffel Tower looks just like the real one before confiding that she's never actually been to Paris.

Most of Jia's speakers have never set foot on a plane, and when a wedding toast includes "world peace" and "women's rights," it speaks to a recognition of the greatest irony of globalization: that people who've never been anywhere, done anything, thought any grand design, are now pundits for profundity, philosophers of the new millennium with their wanderlust smothered in the cradle of un-acted-upon desires.

The World functions as a science-fiction of a place hermetically-sealed from the outside world with its inhabitants programmed into the contradictory existential response of knowing that they're in a bubble whilst believing that they're not. And, trickily, it functions as an allegory for our own conflicted place in modernity in the same breath.

The World is giddily anti-establishment and, moreover, recognizes hope as a thing with feathers roosting the hearts of his players. (W. Chaw, Film Freak Central)