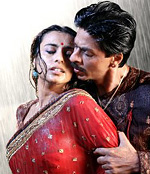 My God, the visuals!

First things first, this is the best-looking Indian film in a very long time, and ranks up there with the finest ever. Amol Palekar has crafted a delectable fairytale that is incredibly well-shot. Ravi K Chandran's cinematography is spellbinding as he casts us into the fabulous sandscapes of Rajasthan with fluid harmony. Each frame of the film is picture-perfect, marinated in intoxicating colour. Real life, as we ingloriously witness after reluctantly exiting the theatre, never looked this good.

Shah is the period Rajasthani equivalent of a chartered accountant, mesmerised by the concept of marriage.

Rukh is a sprite, a shapeshifting mischief-maker who wanders aimlessly around, amusing himself. Thoroughly smitten by Lachchi (the new bride, played by Rani Mukerjee), he tries to woo her by entering the bodies of passing ravens and squirrels, even teasing her with a glimpse of his wet footprints.

Rukh learns that Shah has left Lachchi alone after the wedding, on business for five years. He decides to take the husband's form, just so he can be closer to his lady-love. After all, the man won't be back for five whole years.

It's a charming, warm romance capable of giving the most sceptical of us a big, beaming smile. Children will love it, and the affection involved in the film's creation is infectiously visible to the audience. And the twist at the end raises astonishingly dark questions about fairytale metaphors, and sends you home thinking. Smiling, but thinking. (R. Sen, Rediff.com)