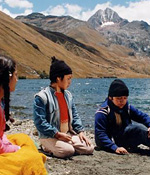 Set in the majestic Peruvian Andes Paloma de Papel (Paper Dove) recounts the harrowing coming of age of Juan (Antonio Callirgos). After his best friend's father is murdered by Shining Path guerrilla fighters, 11-year-old Juan discovers that his stepfather, Fermin (Aristóteles Picho) is a "terruco" (terrorist) involved in the crime. Fermin then arranges for Juan to be kidnapped and indoctrinated by Shining Path. Juan's life undergoes a drastic turn, from innocently chasing sheep with girlfriend Rosita (Anais Padilla Aban) to learning how to make dirty bombs.

Former soap-opera actor Fabrizio Aguilar makes an impressive debut as writer, producer and director. He compellingly illustrates the limbo in which many rural communities lived, caught between corrupt and unreliable government troops and fanatic terrorists.

The characters are multidimensional. Hence, Fermin is not only an abusive stepfather and a traitor, but also a terrified man who struggles to stay sober; Wilmer is not only a cold-blooded murderer, but also a man with strongly held beliefs.

Cinematographer Micaela Cajahuaringa also does a superb job capturing the breathtaking Andean mountains. Mixing wide shots of the dramatic countryside with careful close-ups of the characters, she offers a complex combination of beauty and suffering, of open vastness and claustrophobic terror.

Although "Paloma de Papel" specifically deals with the Peruvian terrorist group The Shining Path, this heartbreaking film is a timely example of the ideology behind terrorist tactics, the usually inept response from corrupt governments and the toll they both take on innocent people's lives. It ought not be missed. (M. Careño King, OffOffOff)