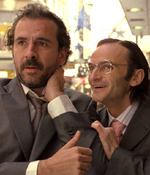 It is no secret that Álex de la Iglesia has built his reputation on outrageous dark comedies, loaded with sex and violence. This time Iglesia has set his camera on beauty, ugliness, jealousy and the curse of marriage, with the most unexpected background, the women's section of a Spanish department store.

Rafael (Guillermo Toledo), a middle-aged womanizer who works at the women's section of the store where he was born, has two obsessions in life: seducing his co-workers and becoming floor manager. After accidentally killing his nemesis for the floor manager position during a fight in a fitting room, Rafael is blackmailed by Lourdes (Monica Cervera), the ugliest employee and the one he has always ignored. From there, his life turns into a nightmare as he is forced into a marriage from which the only exit might be murder.

As in most of his films, Iglesia's humor is cruel, and the bursts of violence are as unexpected as they are hilarious. The filmmaker's taste for provocation is what makes his cinema so unique and vibrant. His films are soaked in irony and self-derision.

His movies are undeniably in the tradition of modern Spanish cinema. Iglesia is a satirist who likes to bend the rules of genre cinema. Here, he offers us twisted versions of a Hitchcock movie and romantic comedy. Once you accept the rules of his cinema, you know you'll be rewarded with strong doses of shamefully contagious humor. (F. Thom, Plume Noire)