From the director of Rivers and Tides: Andy Goldsworthy Working with Time 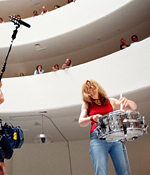 Touch the Sound takes us on a remarkable journey with Evelyn Glennie, one of the world's foremost musicians, a Grammy-winning classical percussionist whose solo work is unrivalled. She is also deaf.

This is her story. Supported by her caring father, Evelyn overcame considerable obstacles to become an extraordinary success. Through her, sound is palpable and rhythm is the basis of everything.

Cinematographer and director Thomas Riedelsheimer demonstrates his knack for mapping a world of senses, of colourful images and evocative sounds of Japan, England, California and New York. Hearing images, seeing sound. We see, hear and truly feel the beat of the universe. We are transformed.

The film deliberately avoids what makes up Evelyn’s musical everyday life: her concerts and performances with the biggest orchestras of the world. Instead, journeys of sound occur – to places foreign or familiar. And through the small, improvised sessions with other musicians from around the globe.

The filming itself lasted an entire year. Add another year for post-production. And because of this time, I hear differently – simply by being more aware. Consciously hearing is as important as an appreciation of seeing, or eating. In this sense: Enjoy your meal! (T. Riedelsheimer)