The Talent Given Us

Weird and wonderful portrait of a functionally dysfunctional family 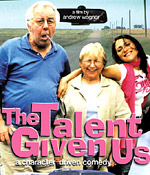 The strange and delightful THE TALENT GIVEN US is a movie that shouldn't work but does rather remarkably. Directed, written and shot by Andrew Wagner, the film hinges on a retired late-middle-aged couple, Allen and Judith, who spontaneously decide to drive from New York to Los Angeles to visit their son, Andrew. (The New York Times)

The Talent Given Us