Videos, commercials, and shorts from the world's best directors 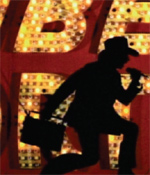 Co-promoted by Albums on the Hill, Radio 1190, and Palm Pictures