Welcome to the Dollhouse

An unforgiving look at the hell of junior high 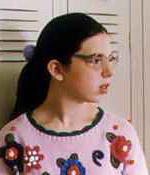 ``Welcome to the Dollhouse'' remembers with brutal and unforgiving accuracy the hell of junior high school. Many movies reconstruct those years as a sort of adolescent paradise; it's a shock, watching this film, to remember how cruel kids can be to one another, and how deeply the wounds cut.

She is inevitably known as``Wiener Dog'' in school. She is also known as``Lesbo'' and ``Stupid,'' and when she asks a classmate why she hates her, she gets a refreshingly direct answer: ``You're ugly.'' She isn't ugly, simply unformed in that in-between way, but she projects the vibes of a potential victim, and there are always going to be sadists whose antennae lead them straight to their targets.

But I'm making ``Welcome to the Dollhouse'' sound like some sort of grim sociological study, and in fact it's a funny, intensely entertaining film: intense, because it focuses so mercilessly on the behavior of its characters that we are forced to confront both the comedy and the pain. (R. Ebert, Chicago Sun Times)

Welcome to the Dollhouse