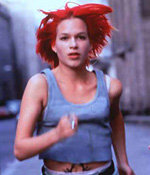 “Run Lola Run” is the filmic equivalent of techno dance music. There is never a gap between tracks and never a slow moment for rest. It’s all rhythm, style, and energy. There’s not much you’d call a melody, but then that’s not what this style calls for.

Lola (Franka Potente) gets a phone call from her boyfriend Manni (Moritz Bleibtreu). The crime they were supposed to be in on together went down as planned, but Lola wasn’t there to give him a getaway ride. Manni had to take the train into town with the bag of loot. When the cops boarded the train, he got off out of habit, only he forgot the bag. Lola tells Manni to hold on. She’ll be there ASAP to set things right. She spends the next 20 minutes of film time running through the streets, stopping only at her father’s bank to ask for money. She arrives at Manni’s location just one second too late.

Manni walks into a grocery store to rob it so he can pay the big boss. The robbery goes bad and the two end up dead. Lola screams “STOP!” and the movie starts over again. Lola runs through two more iterations of the same scenario with varying results. The differences are both subtle and grand. Are the scenarios alternate universes? Are they imagined? Are they three separate films? That question is never answered, nor is it important to the enjoyment of the movie, because it’s all about form and style. (M. Mapes, Movie Habit)