At the fulcrum between Salvador Dali and David Cronenberg 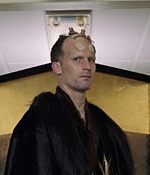 If you missed Matthew Barney's surreal opus The Cremaster Cycle on the festival circuit, tough luck. It's understandable if you missed it; after all, the experimental, storyless structure and the four-hour running time of one of the five segments made it a hard sell. Though some of us are sorry to have missed it, once it was gone, it was gone. Barney notoriously refuses to allow Cremaster to be released on DVD.

I made sure to catch Barney's latest opus, Drawing Restraint 9, while I could. If you want to make sure you don't miss it, see it as soon as you can.

As a work of art, Drawing Restraint 9 has form. It has internal consistency. The aforementioned shape and substance are repeated, varied, and riffed on like a musical composition. Running through the film is a theme of mankind's relationship to whales. Drawing Restraint 9 even has a feature-film structure; the emotional level fluctuates from scene to scene, all the while building to the big emotional climax, and then coming back down to ease the audience back into reality. (M. Mapes, Movie Habit)

Matthew Barney's disquieting, biomechanical surrealism suggests (he's somewhere at the fulcrum between Salvador Dali and David Cronenberg) that the attempt to articulate the perversity of man's exploitation of his natural resources seems a little like what it is: an artist too good and too provocative to waste his time on something that sells so trite. There's a problem as well with how quickly Barney drops his breathtaking mass processional scenes, telescoping his continuing extrapolation of religiosity and ritual (Barney is to post-modernism what Manet was to realism) down to the pinpoint of a disturbing conjugal circle-mutilation between him and Björk in a half-flooded stateroom on what appears to be a cyborg whaler, the Nisshin Maru, berthed and born in Hiroshima and afloat, now, in Nagasaki Bay.

Preceding this is a tea ritual consisting of a bile-green liquid infused with ambergris and served in shells that mirror Barney and Björk Shinto marriage gowns, which are adorned with the carapaces of sea creatures. Find logic here in Barney's choice of the Japanese culture as the looking glass through which he filters his thoughts on the madness of man's ideological divorce (and inseparability) from his truer nature. It's a refashioning of a culture that has taken the elevation of ceremony to something like fervour, while the spectre of nuclear holocaust hangs over their mass veneration of equal, disparate draughts of big-eyed cute and nihilistic horror. (Powder-pop vs. bukkake.).

It's not too great a stretch to see that the effect of Drawing Restraint 9 could have been an Ozu film or a Wallace Stevens poem--and its appearance in a United States post-9/11 (our own little version of Armageddon from above) feels less like an accident than like a cry of recognition. Rocks bleed petroleum jelly (not a bad analog for geological amniotic fluid) while a giant cylinder of volcanic issue, this film's lunar monolith, subs in the picture's visual vernacular for the limited resource plundered in Man's heedless forward ambition. The film's liquid baseline stands in contrast to Cremaster's priapismic constructions -- but that confrontation between the mercurial with the eternal, the eternally-mutable force with the immutable effigy, doesn't quite yield the kind of introspective, existential epiphany of which Barney's art is capable. What remains, once unmoored from the illusion of circumstance, is a visually-arresting, sometimes impossible-to-watch art installation about how man falls away from his self only to return to the dank fold of the collective through ritual, religion, and the ineffable tides of art that bind. It's a lovely thought, but it's not a surprising one; going out on that proverbial limb, it all might be much ado about nothing. (W. Chaw, Film Freak Central)