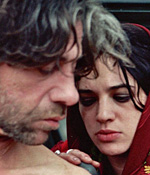 One of Europe’s most beloved directors, Tony Gatlif has built his wondrous career through a distinctive series of musical, poetic films. American audiences know him for works including Latcho Drom (1993), Mondo (1996), Gadjo Dilo (1997) and Vengo (2000). Gatlif follows passionate characters living on society’s fringes; each is richly layered, filled with gorgeous places and people and each explores the challenges and possibilities for cultures, especially Gypsy or Roma culture that exist outside the European mainstream. With Transylvania, the closing night film at the 2006 Cannes Film Festival, Gatlif uses that successful template but visits new territory. He follows Zingarina (Asia Argento) as she travels from France to Romania where the famed Sighet folk festival is underway. She is in search of the musician she loves but who suddenly abandoned her.