Could it happen here? 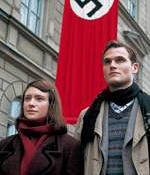 "Sophie Scholl: The Final Days" conveys what it must have been like to be a young, smart, idealistic dissenter in Nazi Germany, where no dissent was tolerated. This gripping true story, directed in a cool, semi-documentary style by the German filmmaker Marc Rothemund from a screenplay by Fred Breinersdorfer, challenges you to gauge your own courage and strength of character should you find yourself in similar circumstances. Would you risk your life the way Sophie Scholl (Julia Jentsch) and a tiny group of fellow students at Munich University did to spread antigovernment leaflets? How would you behave during the kind of relentless interrogations that Sophie endures? If sentenced to death for your activities, would you still consider your resistance to have been worth it? In a climate of national debate in the United States about the overriding of certain civil liberties to fight terrorism, the movie looks back on a worst possible scenario in which such liberties were taken away. It raises an unspoken question: could it happen here? (S. Holden, New York Times)